The current Southborough Hub plans are set to be approved at a Tunbridge Wells planning committee meeting on Wednesday 9th November amid a new warning that such a decision would signal the end of high quality theatre in town.

The project team at Kent County Council and Southborough Town Council have pushed ahead with their planning application despite the “Southborough Deserves Better” petition signed by more than a thousand residents opposing the current scheme. Link explaining petition here:

As expected, the professional council planners have recommended the Hub scheme is  approved and it is unlikely that the elected councillors will defy that advice.  However, the objection from Sport England to the loss of part of the Ridgewaye playing fields hasn’t been dropped and that could still mean there’s a chance that next Wednesday’s decision is later overruled by central government planning authorities.

Mr Egan continued: “If councillors push through this plan, the days of high quality theatre in Southborough are over. The new Hub hall has no stage, nowhere for scenery or an orchestra and has not enough dressing rooms or toilets for performers to meet legal requirements.  The architects have no idea.  We were promised a refurbished Royal Victoria Hall or a “state of the art” replacement.  We will have neither.  We have been deceived.”

The document that the Councillors next Wednesday will consider before making their decision was published on Tuesday. It was written by the professional planning officers at Tunbridge Wells Borough Council (TWBC) and concludes: “These proposals provide the opportunity for the reinvigoration and regeneration of Southborough town centre.”

The picture below shows the first floor plan of the Community Hall showing meeting rooms that would double up as dressing rooms for theatre productions.

The full time planning officers at TWBC will have been in consultation with the Hub project team for many months and so will have already tried to steer the proposal to a form acceptable to current planning regulations.  It is still possible that the officers’ recommendation will be rejected by the elected councillors on the TWBC planning committee when it meets on Wednesday.

In addition, planning law states that if the statutory body, Sport England, are opposed to the scheme, then the planners at Tunbridge Wells won’t get the final say.  Instead a unit within the government department dealing with local government (the National Planning Casework Unit) will decide whether to refer the issue to the Secretary of State for Communities and Local Government, Sajid Javid.  And he would then make the final decision.

In a controversial paragraph 10.22, the TWBC planners state that “the local population voted overwhelmingly at the November 2015-January 2016 consultation exercise in favour of a new build”. It is not clear whether the planners were aware that the total number supporting the new build at that consultation was only 181 Southborough people out of just 287 respondents from the town.  The option of refurbishing the Royal Victoria Hall in tact wasn’t included in the choices offered by the council at that stage, despite the earlier petitions signed by thousands of residents arguing for the Victoria Hall to be reopened.

Here are some key sections from the TWBC report on reasons for recommending approval:

In the detailed explanation of the proposal, the TWBC document states:

There are three main components of the proposed hub building:
(1)   theatre/community hall – this is the forward-most “block” fronting London Road. It contains a 350 person capacity theatre/main community hall with associated back of house workshops, storage, toilets, plant room and kitchen; a self contained ground floor retail unit facing London Road; community rooms at first floor level above the retail unit. The community / theatre elements would provide for flexible use that could be hired separately for community groups, events and theatrical productions. This is the tallest part of the building – two storeys on the frontage rising to an equivalent four storey height (similar to the height of the flats at Hythe Close).

(2)    circular shaped central core – as well as providing the main entrance to the
theatre/community space, this would accommodate the replacement Town Council office accommodation, a library and a small café/bar to support the community uses. This space is single storey but with generous (4m to 6m) headroom and a central rooflight. It has a large overhanging canopy that provides space for outdoor seating associated with the café

(3)  medical centre – this two storey element is located furthest from London Road and is accessible either from the central core or through its own entrance.

The document continues in para 2.12:

The Hub is a public building which is intended to be iconic and provide a distinctive character for the regenerated Southborough town centre. The building would be of a contemporary appearance… The proposed external materials for the walls are fibre cement panels and glazing at the lower level, copper cladding and a lightweight translucent polycarbonate cladding material at the upper levels that will provide an opportunity to illuminate the building at night. Amended details have been received which show changes to the external appearance of the building with regard to materials.

The planning document implies there is a planning requirement to explore ways the Royal Victoria Hall could be retained, but goes on to state:

The applicant has confirmed the following:
–    the Royal Victoria Hall maintenance costs have been rising over the past decade and, following a recent insurance claim against the Town Council from a member of the public injured in the hall, along with drains and walls collapsing, the decision was taken by STC to eventually close the facility as they could no longer afford the outlays.
–    At the outset of the project, various surveys were undertaken on the building, including a report on its condition, which highlighted various problems
–    Funding was explored with the Heritage Lottery Fund and Arts Council England to retain the building but both were negative responses.
–    The current building is not flexible, with a racked stage that is unable to be used for any other purpose. The seating is screwed down and the building is not accessible in some areas.
–    The building does not meet current building regulations in terms of acoustic and thermal insulation, HVAC (heating, ventilation and air conditioning), fire regulations, asbestos and other public performance space requirements.
–    There are greater costs associated with the refurbishment of older buildings.

In tandem with the above, consultation was carried out on both options and the local population voted overwhelmingly at the November 2015-January 2016 consultation exercise in favour of a new build.

It is accepted that the above satisfactorily demonstrates that the policy requirement for the applicant to explore opportunities to retain and improve the Royal Victoria Hall has been complied with and the reasons why this option has not been pursued have been clearly explained. 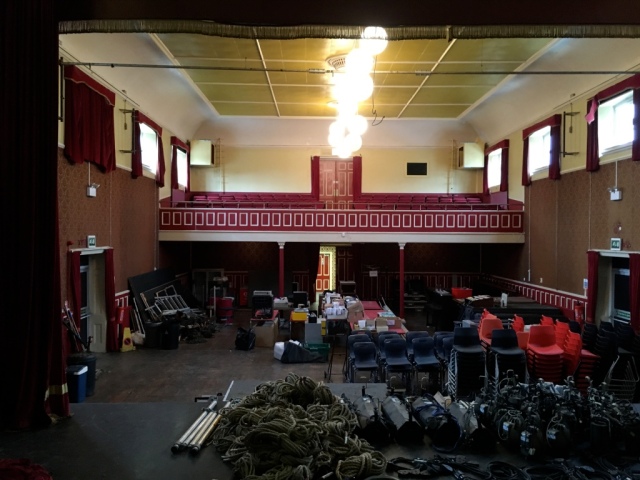 The Hub team’s so far unsuccessful efforts to appease the Sport England objection are outlined in para 2.28:
Since the application was submitted the applicant has clarified that in compensation for the loss of playing pitches from the application site, the following improvements and enhancements would be made to the adjacent playing fields:

The planning officers come down on the side of the Hub team and not Sport England, arguing:

The proposed sports pavilion proposed is a two storey building that has four group changing rooms and two individual changing rooms with hot and cold running water. This is considered to be a substantial improvement over the current temporary use of the former Ridgewaye school building, which does not have any showers. Whilst the pavilion is located in the area of land allocated for sports pitches provision under SALP Policy AL/SO3, this is considered to be acceptable as the pavilion is sited so as not to affect the pitch layout…

The final paragraphs include:

10.93 As further clarified during the course of this application, these proposals will provide tangible benefits to the adjacent playing fields, which in your officers’ opinion outweigh the loss of a relatively small area of playing pitches when compared to that which will remain. The new sports pavilion, improvements to the playing pitch levels in parts of the site to increase of the playable area of the adjacent playing fields will increase the playing capacity and enhance the facilities offered here.

10.94  The design of the proposed Hub building is uncompromisingly modern and is not to everyone’s taste. However, when account is taken of national planning policy on design, the building and the site’s layout has much to commend it. The building has been deliberately designed to be a landmark, signalling the heart of the town centre at all times of the day, including during the evening. The variety of the townscape, particularly on the eastern side of London Road, provides an opportunity to create a distinctive design. Concerns regarding the suitability of the translucent polycarbonate cladding are understood and there will be scope as the fine details of the building’s design progresses to address this.