Southborough has a rich history to celebrate and on this blog over the coming year I hope to uncover first hand memories of how people lived in the town over the past 150 years.

In the past decade it has become much easier to trace the names and occupations of the people who lived in every street in Victorian England.

But what is so often missing is the colour – most of the letters and diaries of how people felt at the time – painting a picture of the personalities of Southborough people – all seem to have vanished into nothing.

I’m starting with Pennington Road, as that’s where I live and where I have already rediscovered some remarkable memories and pictures.  A postcard showing the Vicarage Road turn off on the left is below. 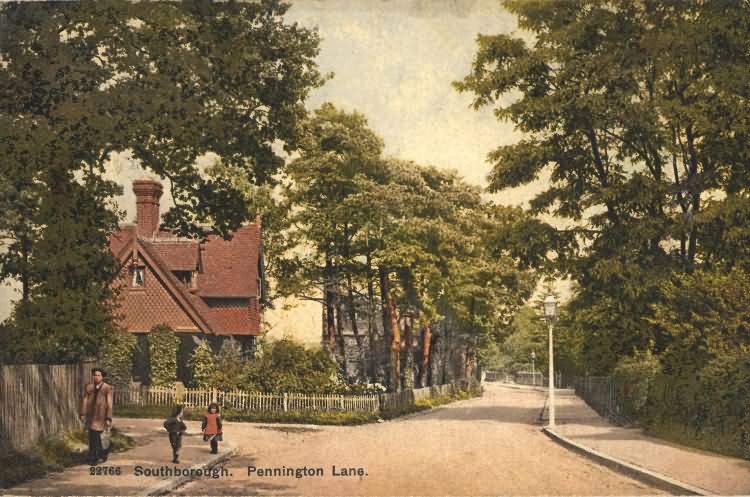 So my appeal is this:  If you have anything in a loft or out of print book that can conjure up life in Southborough from the 1840s to the 1930s, do let me know. My email is:

Pennington Road was – incidentally – named after Dr Robert Rainey Pennington (1766-1849), who was a London surgeon who bought some land in Southborough.

Below is a map found in Southborough library described as “Plan of Freehold building and other land situate at Southborough in the parish of Tonbridge, Kent.” The plan states that an auction of the lots 1 to 18 shown below was held at the Hand and Sceptre Inn on July 2nd, 1849 at 3 o’clock. 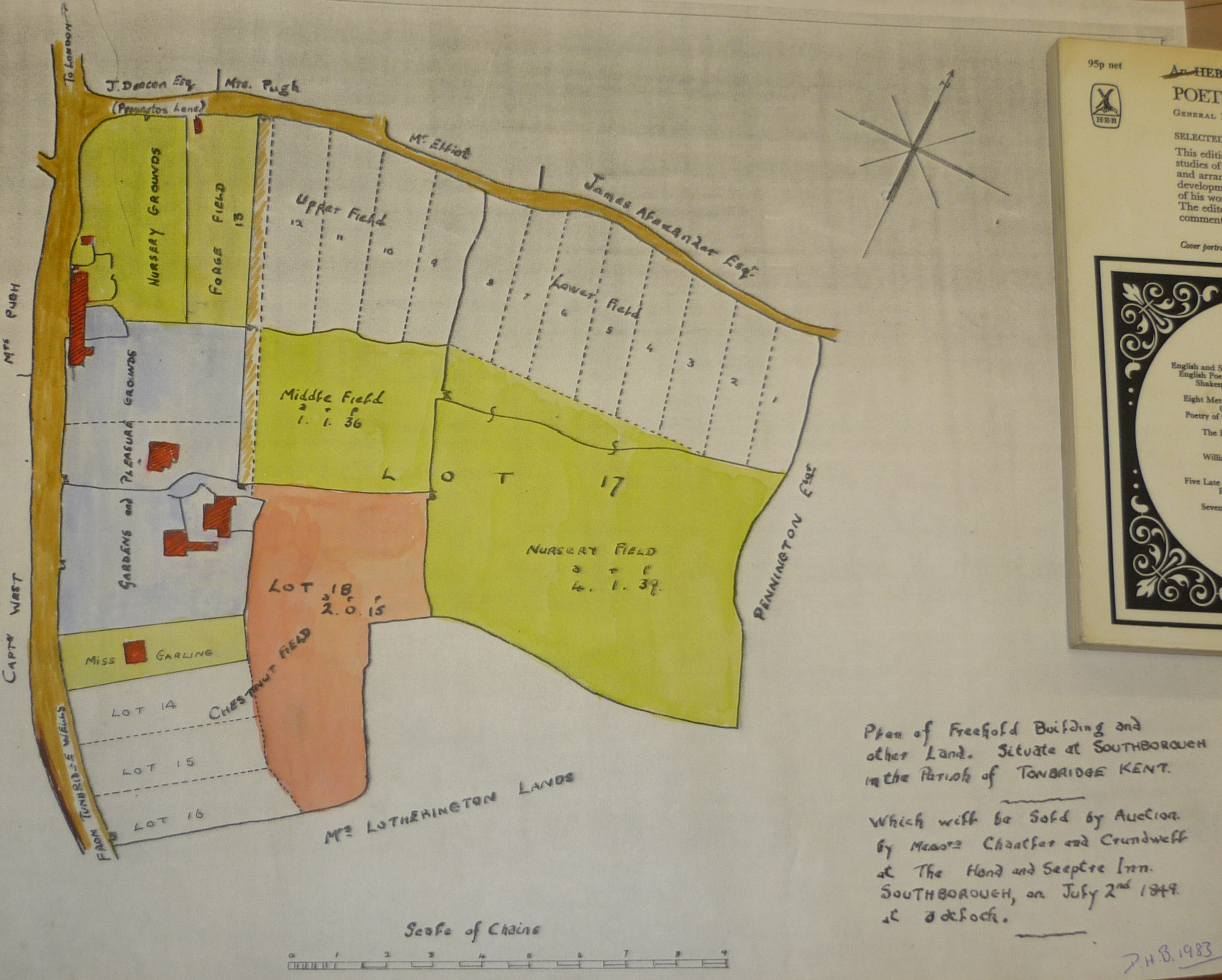 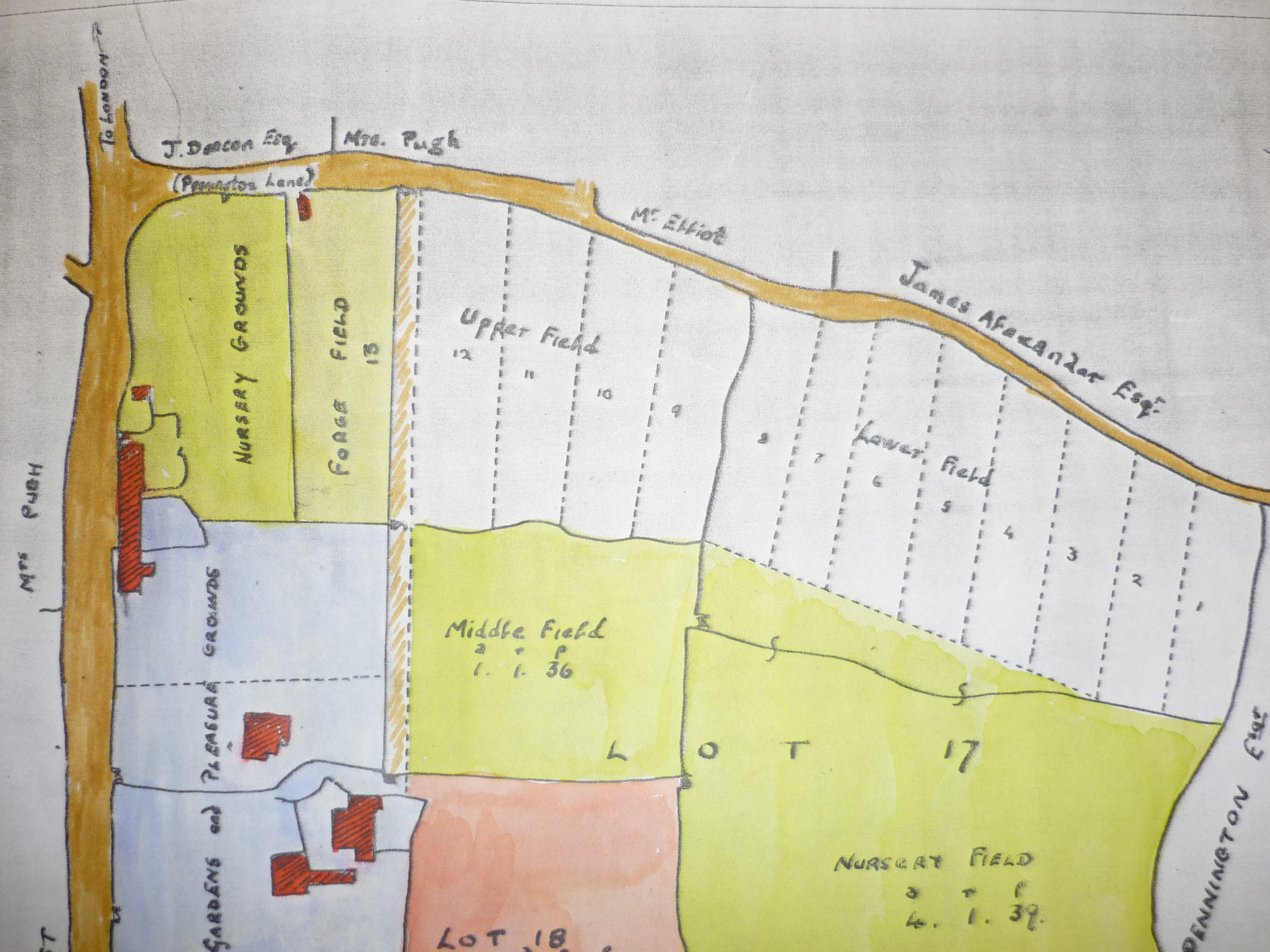 The builders soon got to work and within ten years a good proportion of what survives in Pennington Road had been built.  This is from a map surveyed in 1869 – exactly 150 years ago!

A second map found in Southborough Library is drawn differently but is also from the 1860s and has the same selection of buildings.

Finding out who lived in all these houses has been made easier by the online visibility of the ten yearly census and the Kelly’s street directories.  But it is still not that simple.

In the census of 1861, Pennington Road has no numbering system. The set of terraces next to Castle Street (shown below now and in approx 1911) appeared to have been described as “Edward Place”. 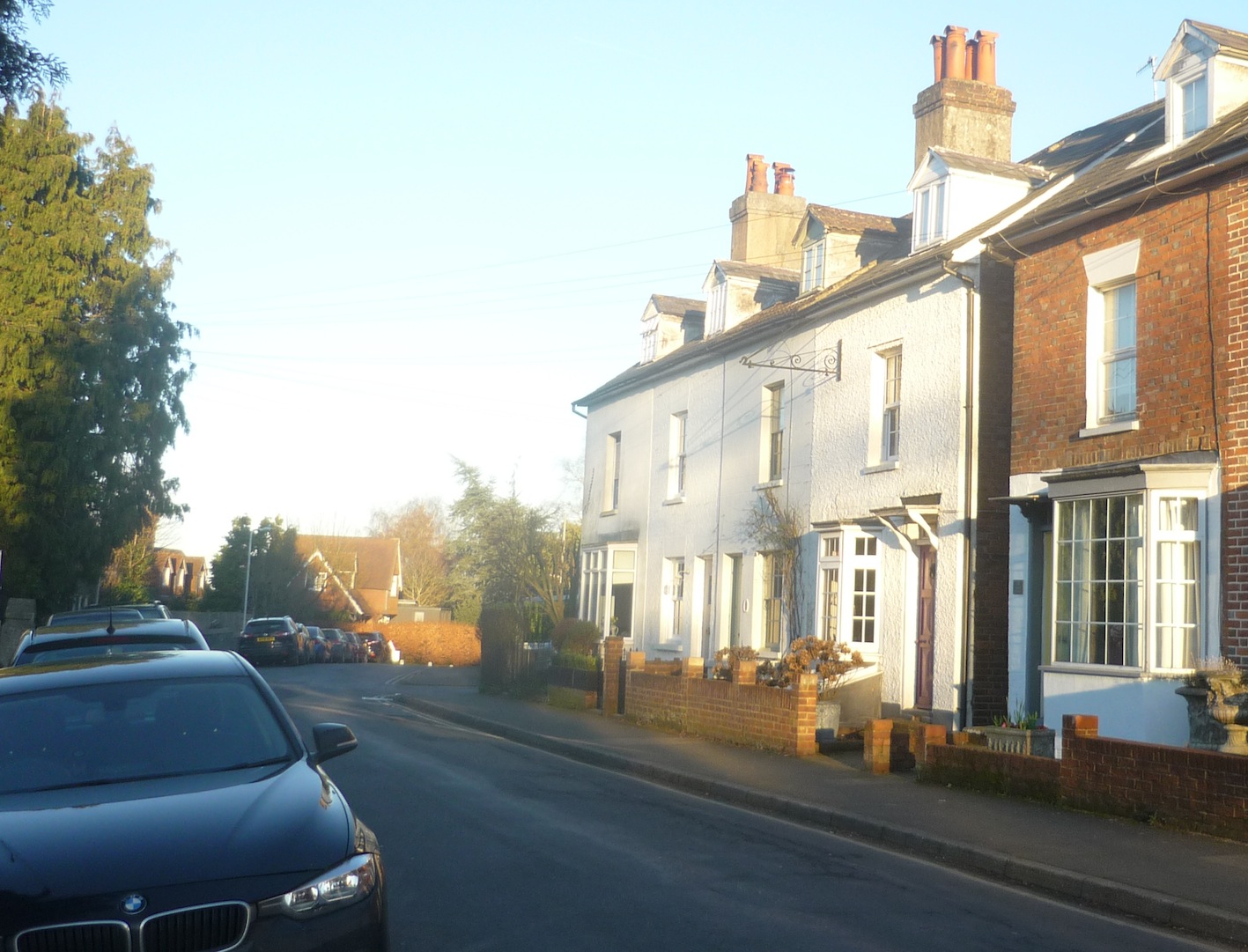 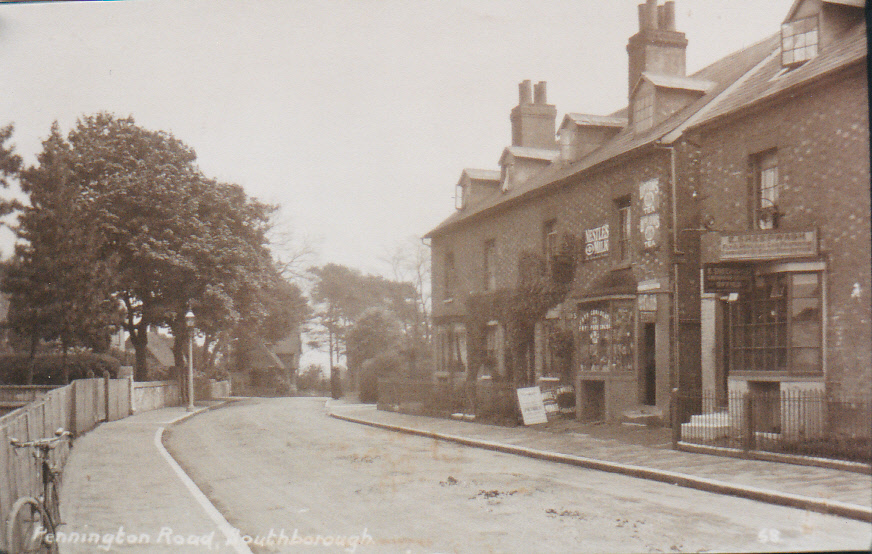 By the census of 1881, houses were numbered but the Post Office had decided to count sequentially starting down the right hand side of the road.  Edward Sheepwash  was a resident of the house on the far right in 1911.  The census calls him a “job master” and his sign is just visible above and reads “Fly and Funeral Car Proprietor. Carriages of Every Description.” 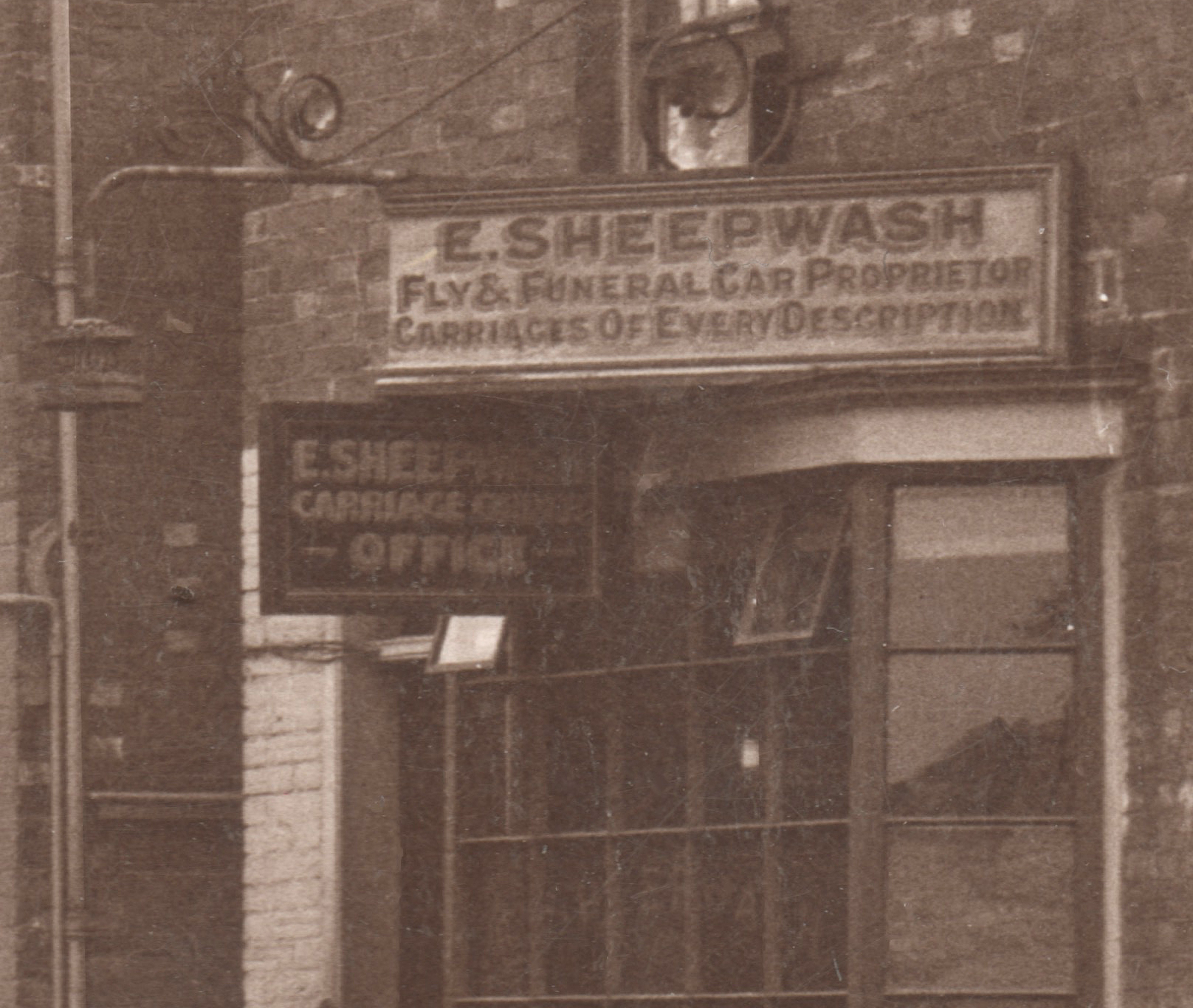 Back in 1881, Mr Sheepwash’s house was number 7 and living there then was a greengrocer called William J. Carpenter. By the time Mr Sheepwash had his sign up, the Post Office had had a rethink and renumbered to the current scheme, so all the houses on the south of Pennington Road had a number double their original ones. Mr Sheepwash therefore lived in 14 Pennington Road. 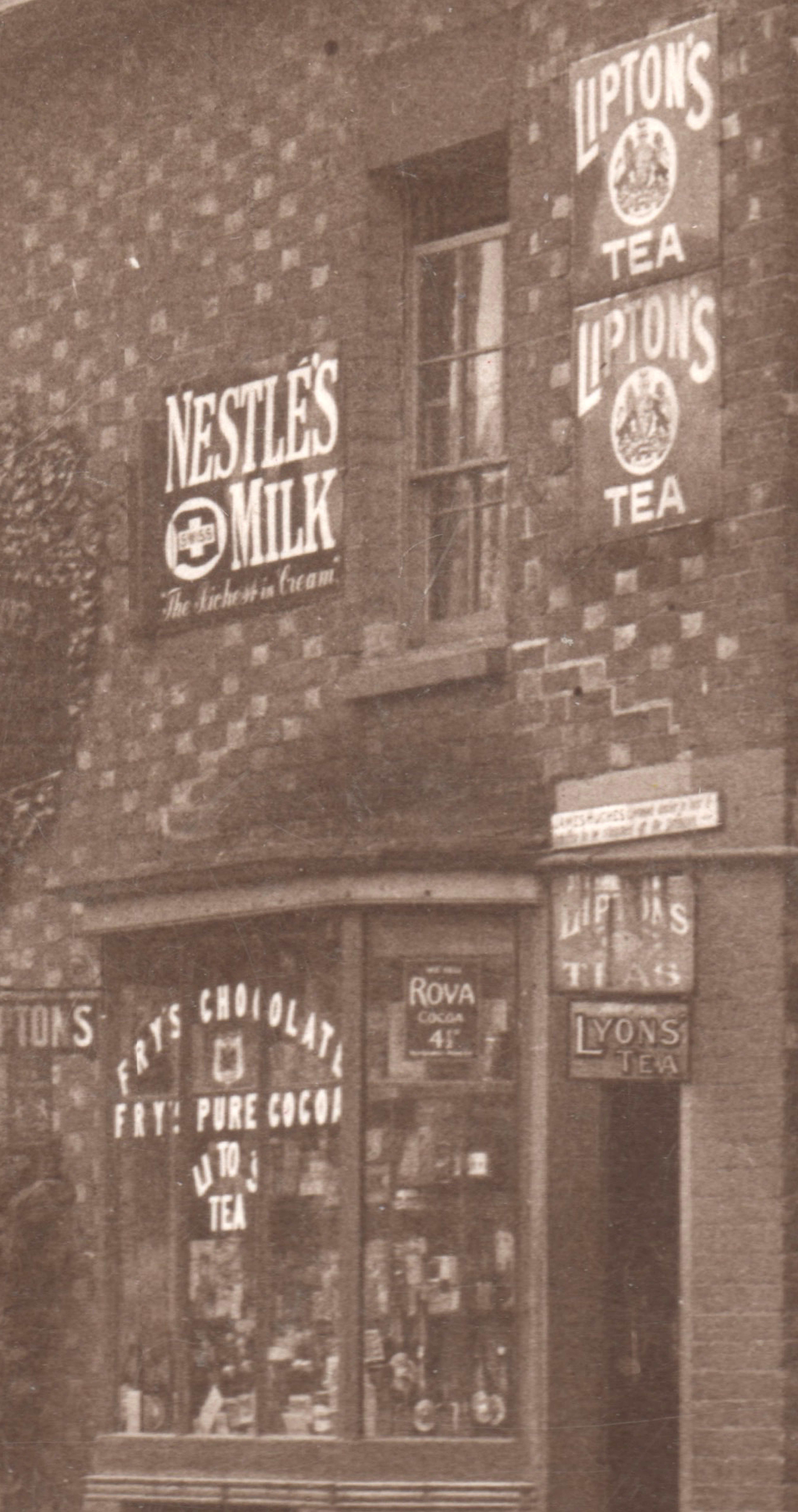 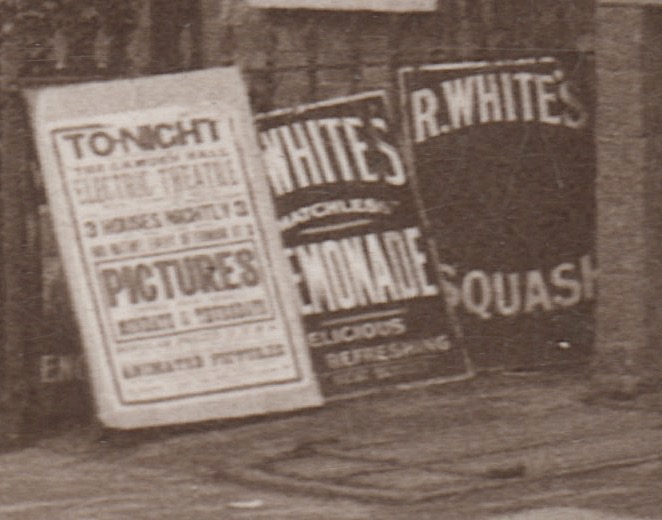 A great website with the residents from the 1881 census clearly laid out according to the old numbering system (ie half the current number) is here:

Here are some more views of St Thomas’ Church completed in 1860.

St Thomas’ Church was consecrated by the Archbishop of Canterbury on 4th December 1860, in the presence of the 85 year-old Mrs Sarah Pugh, at whose expense the church had been built and endowed. In 1871 the church was given its own parish, carved out of what had been St Peter’s parish.  For more see: 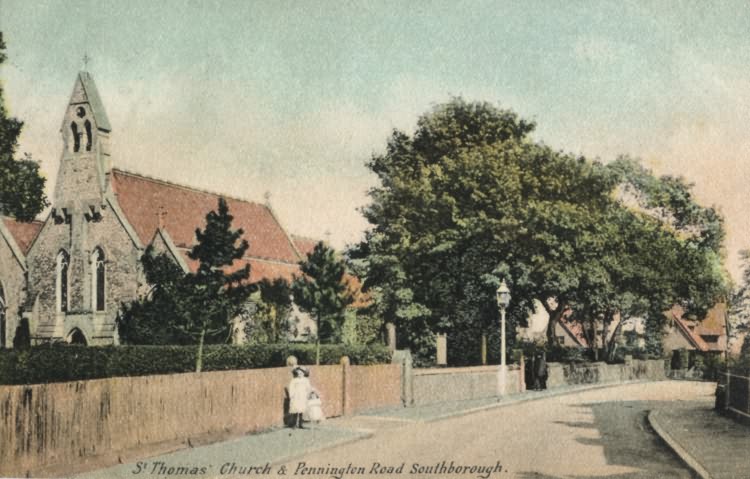 Most of the following pictures come courtesy of Mr Fred Scales of Edward Street who has a magnificent collection of images of Southborough past. So let’s walk further down the road…

In the middle of the picture above is the building now known as “The Old Dairy” – another of Pennington Road’s listed buildings.  It used to be two separate cottages and there’s another closer view on the left in the pictures below.  In 1861, they were “Deacons Cottages”. Eliza Collins was a resident in 1861 and – remarkably – for all the following 40 years too, by which time her house had been known as 44 Pennington Road and (by 1891) number 5 Pennington Road. 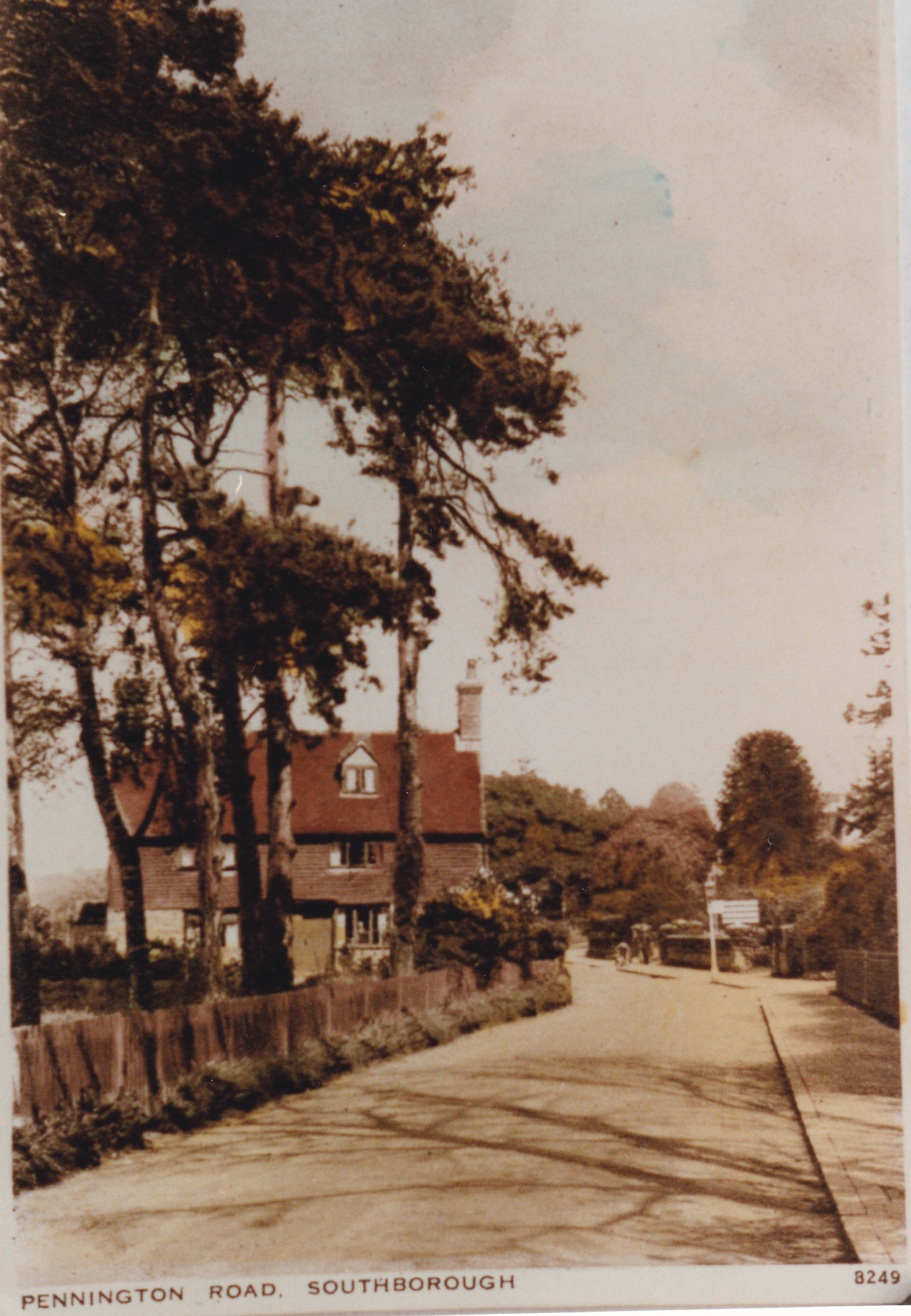 Off on the right are what I think were once called “Stanley Villas”.  One of them is now number 34 Pennington Road and shown below – many years before the grey render walls were painted white.

It would be fascinating to know who the people in the picture above were.  Without doubt they would have known some of the Gallards – a family that played a huge part in the history of Pennington Road.

Charles Gallard (1823-1885) was the builder who probably put up many of the Pennington Road houses in the 1850s.  He had a son – also a builder – Charles J. Gallard (1850-1906), who’s bequest funded the Gallards Almshouses, and who left his mark with the many drain covers still in use in Pennington Road today.

Charles Gallard’s first wife died in 1852, but he remarried a few years later.  As a result, Charles J. Gallard had one sister, plus 3 half brothers and 7 half sisters. Among his half sisters was a lady called Isabella Gallard (1861-1952).  I’m pleased to say that – remarkably – I have spoken recently to a lady who gave me a first hand of what Isabella was like.

The lady was Isabella’s niece who moved into 36 Pennington Road in the 1950s when her family came to look after Isabella, then 90 years old. The picture of Isabella Gallard on a horse was apparently from 1909 in Ireland. 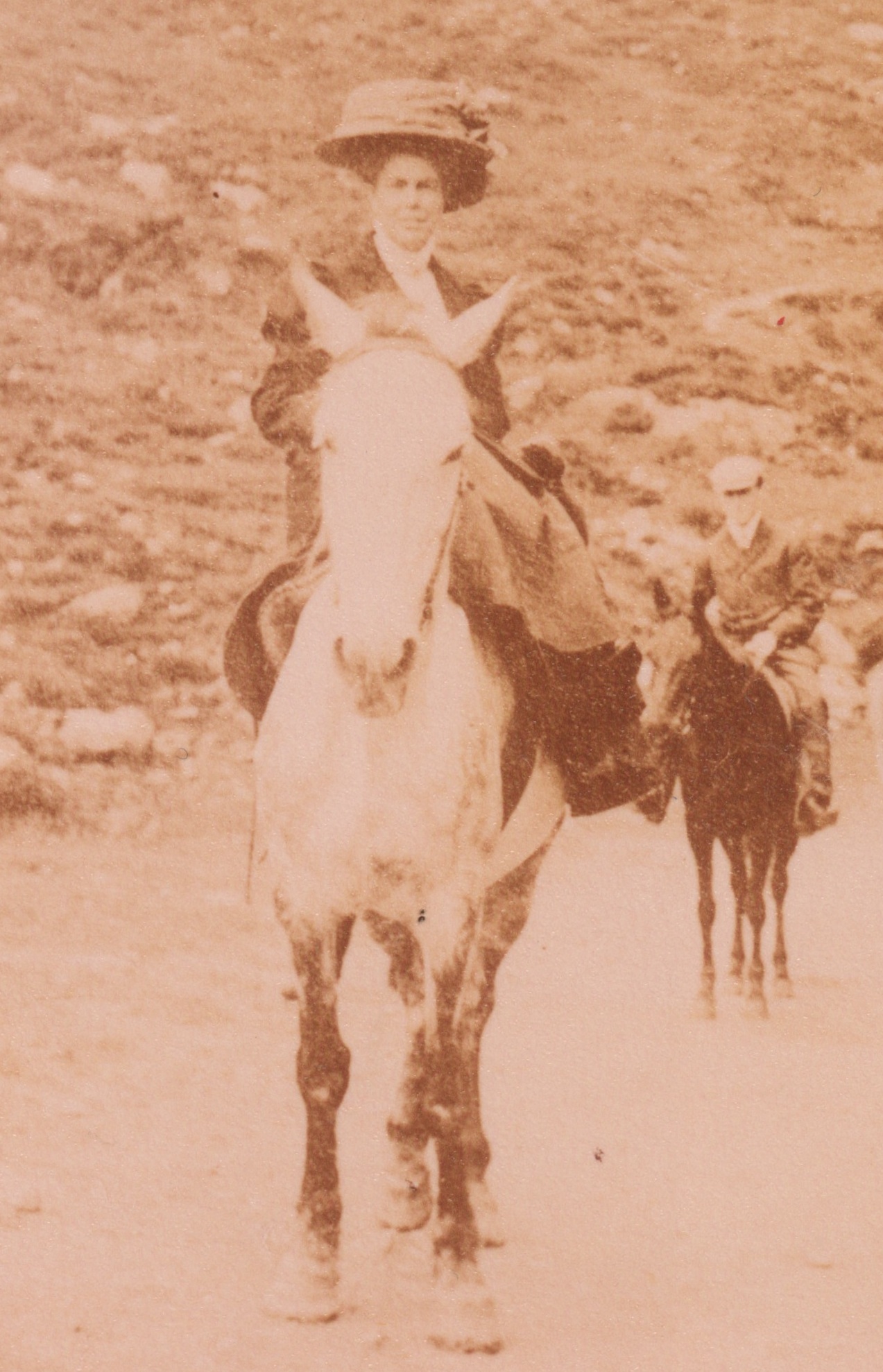 Isabella Gallard was clearly a stubborn lady – she was still insisting in the 1950s that electricity was “far too dangerous” to have in the house and all the lighting in number 36 was still by gas. Her house had a “tradesman’s entrance” although the path started and ended from the same places and just involved the tradesmen walking to the left of the hedge while the ladies and gentlemen walked up a different path to the right of the hedge.

How I tracked down a relative of Isabella Gallard is a story for another blog, but I learnt some fascinating detail and I am hoping – that with this blog – I can capture a lot more.

Further down Pennington Road (but still before Park Road) is the house once called Mount Sandford – now 44. Pictured then and now.

In the picture taken this week you can see number 44A has been added (far left), while to the right in this picture is a building on the site of the demolished old 42 (formerly 21 and formerly Shenley Villas). Then there is the still surviving Victorian building number 40 (now divided into two large semi-detatched houses 40 and 40A with some huge trees in their front gardens).  Finally, number 38 was demolished in the 1980s and is now Dennington Court flats, whose red roof tiles are just visible on the far right above.

Newspaper articles can play a part in adding colour to the historical facts.  An article from November 6, 1874 in the Courier discusses legal action taken by the local board against the first Charles Gallard “for refusing to pay £9 14s 8d” relating to work paving Pennington Road.

The article says: “In April 1873 it was determined that the road should be properly paved and flagged and notice was thereupon given to the owners of the land abutting on the road, requiring them to do the repairs in accordance with certain specifications which were deposited at the surveyor’s offices.”

It appears most owners didn’t do the work, so the Local Board did the work itself and then charged the land owners.  Mr Gallard apparently didn’t agree that the Local Board had the power to do this, as he argued “Pennington-road was a highway dedicated to the parish.”

A Mr Stidolph, who was a surveyor of the Southborough roads in 1856-57 spoke in support of Mr Gallard, stating that the road then was “in a very bad state, and Mr Corke, who got stuck fast in the road, talked about indicting the surveyor.”  The surveyor ordered road improvements. 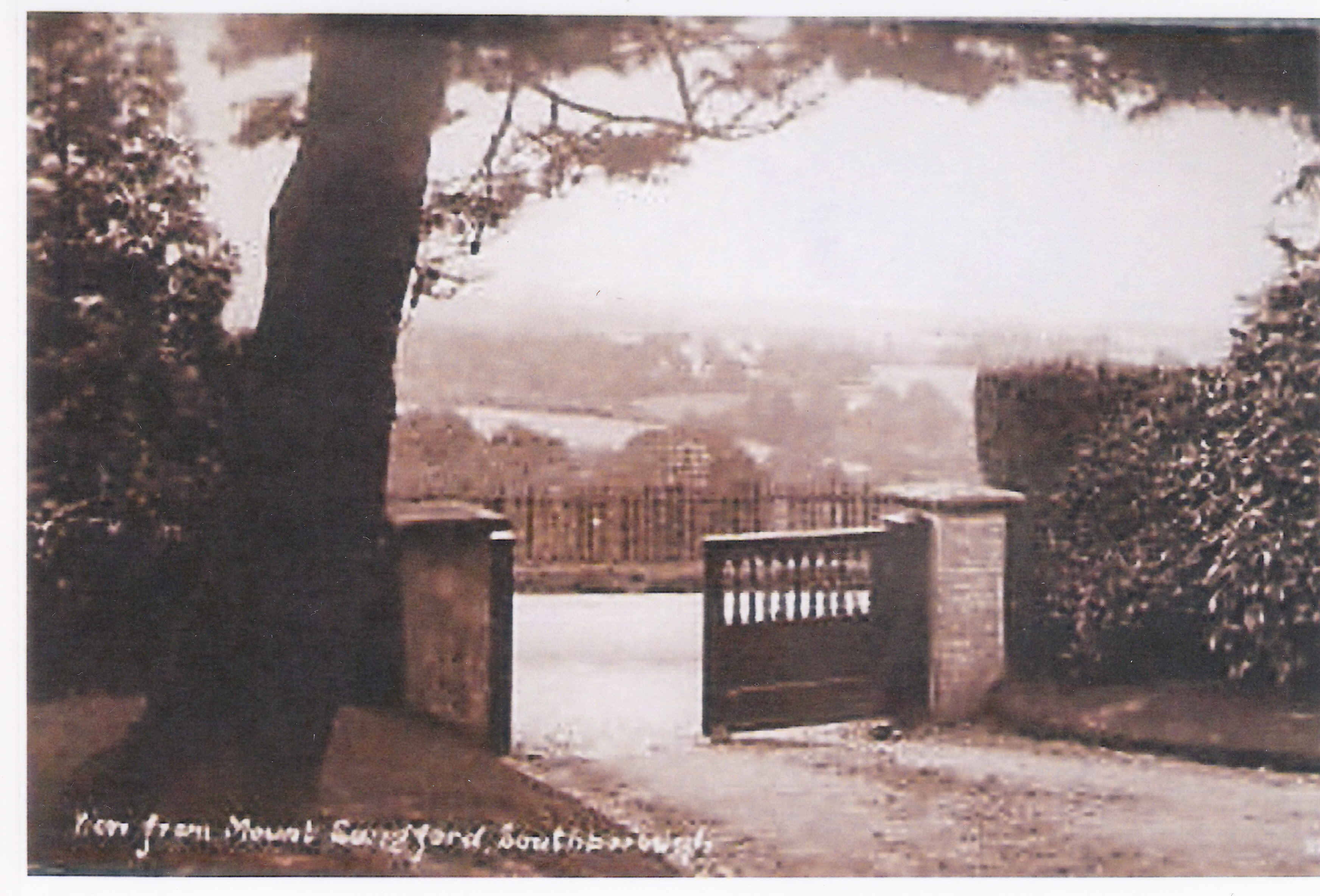 But the Local Board solicitor insisted that “the surveyor, putting a few stones upon the road at parish expense did not make it a public road….there must be evidence of dedication.”

The report ends with the bench concluding that this road “up to a gate at the end of Mr Blackburn-Maze’s property” (then number 37 – i.e. the last before the farm) “was a public highway, therefore the Local Board have no status”.

This result appears to be victory for Mr Gallard in avoiding the Local Board’s bills, even though everyone else in Pennington Road appeared to have already paid up to the Council.  The Gallards do indeed seem to have been a stubborn lot.

Finally for this blog is a (unfortunately somewhat blurred) picture of the terraces that were 26-30, now 52 to 60 Pennington Road.

The pictures conjour up a quieter time without the traffic and aeroplane noise. In Victorian times, the census shows Pennington Road was a mix of terraces for the working classes (carpenters, gardeners etc) and reasonably large villas for the middle class such as retired military gentlemen, widows “living on independent means” and doctors.  The villas all had servants to clean, cook and light the open coal fireplaces.

The newspaper archives also reveal how people of Pennington Road came together in August 1887 as 110 local residents signed a petition which was presented to the Local Board (council).  This petition was in opposition to potential extra traffic on the road thanks to an apparent scheme for a Southborough railway station at the viaduct, accessed via Pennington Road.

The petition read: “The traffic of a station thoroughfare would be extremely detrimental to their comfort and interests, whether as occupiers or owners; that it would entirely ruin the present rural privacy and quiet of the properties on both sides of Pennington-road….it would much deteriorate the value of the villas already built by altering the character of the road and so making them less desirable for their present class of tenants.”

The petition argues that the result of a Southborough station would: “be the encouragement of cheap trippers, in any multitude, to visit the Southborough Common; whereas at present most of these disperse themselves among the nearer and larger commons adjacent to the Tunbridge Wells station, and leave Southborough alone.”

The Local Board correctly concluded that the railway had no plan at all to put a station at the viaduct and were aiming instead to put one “in Tunbridge Wells by the Grosvenor Bridge”.  A certain Mr Powell told the meeting: “The Southborough station was a sort of red herring thrown across the tract.”