The contractors Baxall last week finally signed up to build the long delayed Southborough Hub but concerns remain about the future financial burden of the project on the town’s council tax payers.

Southborough residents will benefit from a new medical centre, football pavilion, hall and library. The Hub (design shown below) will be built from pre-fabricated panels imported from Germany, with a ceremony to mark the start of work expected in November.

The scheme nearly collapsed during the summer after senior National Health Service managers reduced what they were prepared to pay in ground rent to occupy the new building, which will be on land owned by Southborough Town Council (shown below on left).

The Tunbridge Wells MP, Greg Clark, was involved in a crisis meeting with representatives from the three councils involved in the scheme on 31stJuly which helped to resolve the impasse.

The St Andrew’s Medical Centre are currently funded by the NHS to pay £60,000 per year rent to occupy their current building which is owned by former doctors who funded the surgery building in the 1970s.

Southborough Town Council had been expecting rent of £67,000 per year to house the St Andrew’s doctors, which would have been used to support the long term maintenance of the new two-story building (the area shaded in purple below). But over the summer the NHS announced such a level of rent was not ‘value for money for the public purse’ and offered only £20,000 a year. 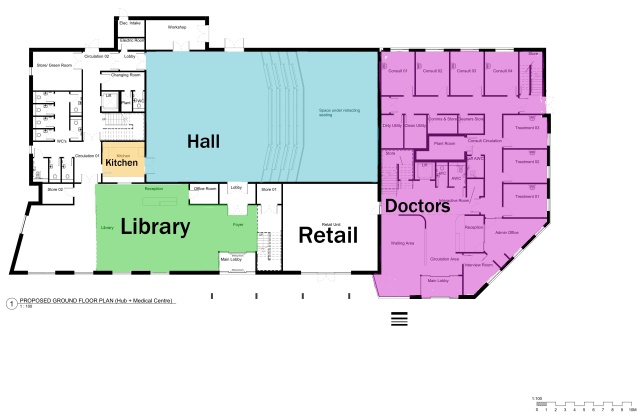 When the NHS threatened to pull the plug on its £4.2 million contribution towards building and fit out costs of the Hub, the Town Council were forced to give up on their expected income.

After the intervention from Greg Clark, the two other councils involved in the scheme agreed to assist the Town Council with any major future costs (like replacing the roof) during the expected future life of the building of 63 years.

So called “letters of comfort” were provided by Tunbridge Wells Borough Council and Kent County Council. The NHS finally approved their investment in the scheme in August. The ground floor rooms in the new surgery are shown below:

In his briefing to the Town Council a week ago, Nick Blackwell stated: “This council has not yet agreed the Operations Management of the Hub despite the build being scheduled to start by the end of the year. This lack of forward planning now means that estimates of running costs are difficult to ascertain. Ideally this council would have committed to a position over a year ago.”

He continued: “We are also lacking a business case and there has been no attempt to realistically establish what the Service Charges might be for the users of the building”.

Cllr Blackwell continued: “Our contract with Baxall has meant that cost increases to the project have been minimised but the uncertainty around Brexit has meant that that fluctuating exchange rate of sterling against the euro will impact on some parts of the project. We have been informed that these are well with the project contingencies.”

Cllr Blackwell refered to the “adverse financial position” that the council is now in. He said: “Some of these risks have to a small degree been minimised by the letters of comfort received from our partners at TWBC and KCC. There is also a small contribution for the first two years of the Hub opening from TWBC and KCC but these will in no way address the considerable financial outlay that that the Hub project has committed this council.” 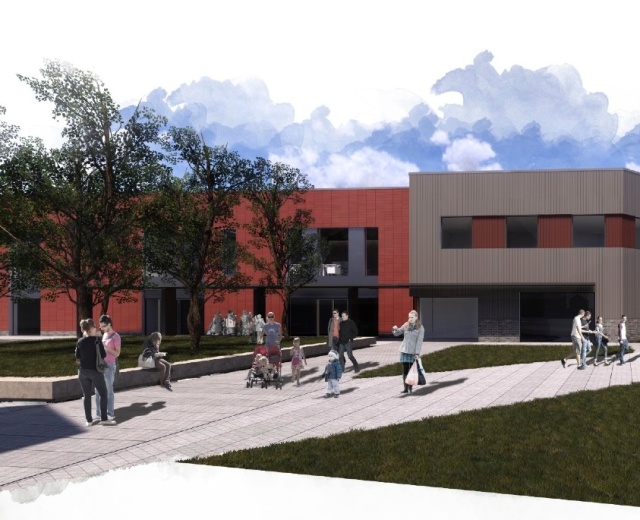 Cllr Blackwell continued in his report to the Council: “All ongoing structural maintenance liabilities for the Community Medical Centre (CMC) will now be borne by this council for the 63 years of the lease on a flat £20,000 rent from the NHS which will quickly lose value.”

It is understood the unexpected loss in income from the rent from the doctors of £47,000pa represents about £6 per year for each Southborough adult (assuming a figure of 8,000 adults in the Town).

Over the summer Tanya Shaw, Business Manager at St Andrews Medical Centre, told the Times of Tunbridge Wells that she was ‘delighted’ on behalf of the surgery’s 9,000 patients that the scheme was going ahead. She said: “It has given us restored vigour and we are very much looking forward to developing new services we can put out to our patients.”

The new hall (shown above) will be multi-purpose with retractable seats with the aim of accommodating a wider range of bookings than the Royal Victoria Hall Theatre that was demolished to make way for the scheme.

Cllr Blackwell (pictured below) told Southborough News this weekend: “We are extremely pleased that the Hub is finally progressing and that residents are seeing the investment in their town centre. It has been a long time aspiration for Southborough Town Council to see a community Hub.”

He continued: “It has been contentious. The building will occupy the site of the much loved Royal Victoria Hall theatre and we have sacrificed precious green space in the centre of our town. Residents have grown weary of the delays and missed deadlines and the lack of financial transparency.”

Cllr Blackwell said: “We are working with a legacy of poor financial oversight which has led to a much reduced specification and we are dismayed that the long promised state-of the-art theatre has been not been realised.”

Cllr Blackwell said: “We acknowledge that there is a great deal of work to be done in engaging the community. We need to ensure that local residents are listened to and feel a sense of ownership.  We want this to be a vibrant, well used building that does not become a burden to the taxpayers.”

Cllr Blackwell concluded: “The hard work still continues. We have started from scratch on a Business Case. And we will do everything we can for the residents of Southborough and High Brooms to ensure that this development pays its way.”

Tunbridge Wells Youth Football Club will get a new club house (shown below) thanks to funding of  £500,000 from Sport England, although the club members will have to pay for the internal fittings.

The Hub is expected to be completed in Spring 2021.

The Hub plans and demolition of the old theatre were voted through by the previous Conservative administration that ran Southborough Town Council until Spring this year. There have been numerous previous articles on this blog about the scheme.

This is one example from one article in April 2017, where residents were given a pledge that their Council tax bill would not rise as a result of the Southborough Hub development.  See:
https://southborough-news.com/2017/04/25/pledge-that-southborough-hub-means-no-increase-in-council-tax-bills/

Cllr Peter Oakford (left in picture below) told the meeting in 2017 that: “The worst case scenario (for the theatre hire revenue) is based on 50 per cent of the revenue that used to be generated by the Royal Victoria Hall and – at that level – the facility – with what is coming in (in rent) from the doctors and the other areas – generates enough money that there will not need to be an increase in the precept for the Council tax.  Absolutely that’s what the numbers have said.” 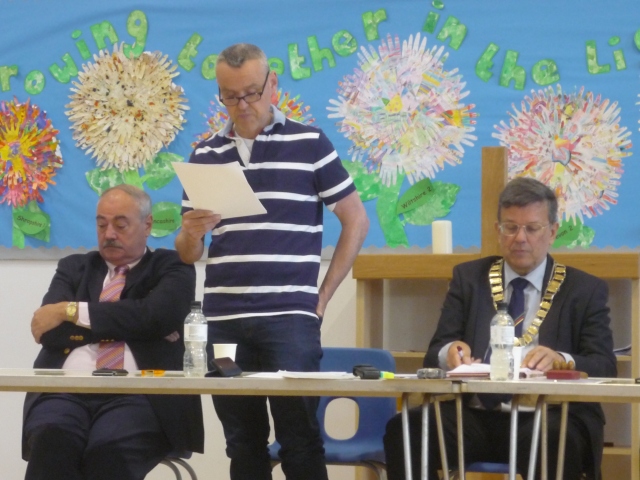 Reaction to the first version of this article on Facebook was mixed.  One comment was: “Brilliant news! Can’t wait for it all to be finished, finally start modernising Southborough.”

But another contributor referred to the decision of the previous Conservative administration to reject efforts to restore the 100 year old Royal Victoria Hall in favour of a new-build scheme with no business plan and wrote: “The whole project is a gold-plated monument to sheer arrogance.”