Southborough Town Council met last week for the first time following May’s local elections and installed Cllr Alain Lewis from the Labour Party as the Town’s new Mayor and Chair of the Council.

Labour is now the largest single party on the Town Council, following the slump in support for the Conservatives as reported in the Southborough News article of May 3rd.

There are now 9 Labour, 6 Conservative and 3 Liberal Democrat members of the Town Council, which looks after local parks, Southborough Common and the cemetery. Planning and refuse are run by Tunbridge Wells Borough Council. Schools and Roads are in the control of Kent County Council.

Cllr Lewis (pictured below) was previously Deputy Mayor 4 years ago.

Cllr Lewis told the “mayor making” Council meeting on 21st May that democracy was thriving in Southborough. He said: “At the recent elections voters clearly signalled that they want a change in the in the way our Council is run and operates.”

Cllr Lewis continued: “My view is that we must respect what residents are telling us. We are the servants of the people we represent, not expect them to be servants of their town council.”

And the new Mayor called on the Conservative run Borough and County Councils, who  therefore have 2 of the 3 votes in the Southborough Hub Project Board, to cooperate with the Town Council. Cllr Lewis said: “They need to support this council and enable us to carry out our mandate, rather than blocking our ideas at the Hub Project Board”.

The current proposed ground floor layout of the Southborough Hub is shown below:

Cllr Lewis concluded: “We must regain the trust of people who live in the town. We must be more transparent in the way we do business. We must listen more. We must do more to involve people in decision making. We must communicate better.”

Cllr Lewis asked that councillors work together on the following five big issues:

(1) We need to make sure that our finances are straight. We want the business plan for the Hub, details of land sales, and an informed forecast the impact of these on our local council taxes over the next few years.

(2) We need to make sure the Hub is fit for purpose. Despite the background of dispute about our new civic buildings we need to look forward and ensure they will meet the needs of the people who will be using them.

(3) We need to do more encourage involvement and contribution. Businesses, voluntary organisations, faith groups and individuals have a lot to offer to preserve and improve our town. Let’s make use of them.

(4) We need to address people’s concerns about roads and transport. Many of these are difficult issues but we could make some further progress on road safety and better transport links.

(5) We need to make our town greener! Climate change will be biggest issue for us all in the decades to come. Let’s do all we can to make our green contribution. Let’s plant trees, grow wild flowers, campaign against litter and do our bit to reducing the use of plastic.

Cllr Dianne Hill (pictured below) was elected as Deputy Mayor. She emphasised that the council covered High Brooms which has always been a distinctive community with its own proud history linked to the old brick and gas works. 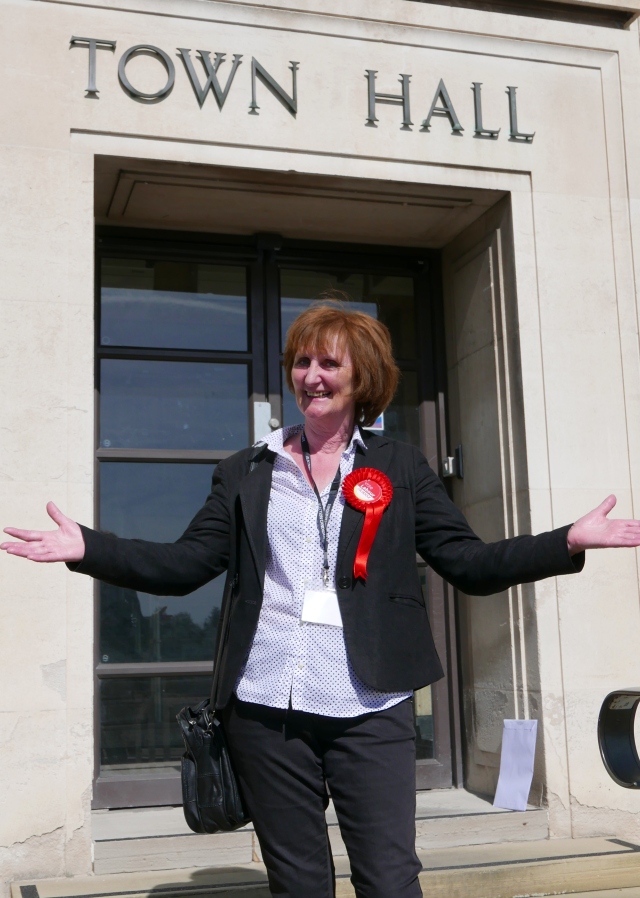 Cllr Hill said: “It is a community that doesn’t have public transport links to Southborough and as a consequence can sometimes feel apart from what is going on in our town and our town centre.”

Cllr Hill concluded: “We need to move on from the divisions we have seen develop over the last few years. Working together we can begin to enjoy again our work on this council and do things that encourage a sense of pride and achievement in our community.”

Cllr Hill emphasised the environmental issues: “We sit in an Area of Outstanding Natural Beauty in the High Weald but at the same time we are choked by pollution and blighted by gridlocked traffic. As a town council we can play our own small part in starting to address some of these problems and I would like to see us setting ourselves a goal of becoming a green town.”

Cllr Elliot said: “It will be interesting being part of the Opposition minority for a change. I can’t always be on the winning side!”