At this year’s Southborough Town Meeting, residents were given a pledge that their Council tax bill would not rise as a result of the Southborough Hub development.

Cllr Peter Oakford (left in picture below) told the meeting that: “The worst case scenario (for the theatre hire revenue) is based on 50 per cent of the revenue that used to be generated by the Royal Victoria Hall and – at that level – the facility – with what is coming in (in rent) from the doctors and the other areas – generates enough money that there will not need to be an increase in the precept for the Council tax.  Absolutely that’s what the numbers have said.”

Cllr Glenn Lester (pictured centre) said the Hub building work would start “late this year”.  He said no decision had been made about what would happen to the current library site. It could be reused by Kent County Council or see 10 new homes built there.

Cllr Oakford revealed that “we have had some offers way above what we anticipated we were going to have for that piece of land (on the playing fields), which gives us extra money to put into the development, which perhaps means we get some better finishes than we thought.”

He continued: “As soon as the deal is signed, the numbers will be made public.” After questioning, it was clarified that the impending land deal is “subject to planning”, so no revenue will be received by the Councils from the developers until a final housing scheme for the playing fields is approved by planners, which is unlikely to happen quickly.

Cllr Oakford was asked why the detailed business plan hadn’t been given to Southborough Town Councillors to scrutinise.  Cllr Oakford argued that no business plan has been published because the information was “commercially sensitive” and if the rents they expected from the coffee shop and doctors facility were published then that would reduce what tenants would offer.

Cllr Dianne Hill (7th from left in picture) from the Labour group responded by saying “I am supposed to be representing these people (in High Brooms) and how can I represent them if I don’t know what’s going on?”

Southborough resident Maxwell Macfarlane asked what forward planning is being made about the management of the Hub’s theatre. A representative from Tunbridge Wells Borough Council confirmed that staff from the Assembly Hall would run the new Southborough Theatre for the first two years “to try to understand what kind of shows might be popular, what kind of demand there is” and then Southborough Town Council would then make a decision who they wanted to run the theatre after that. 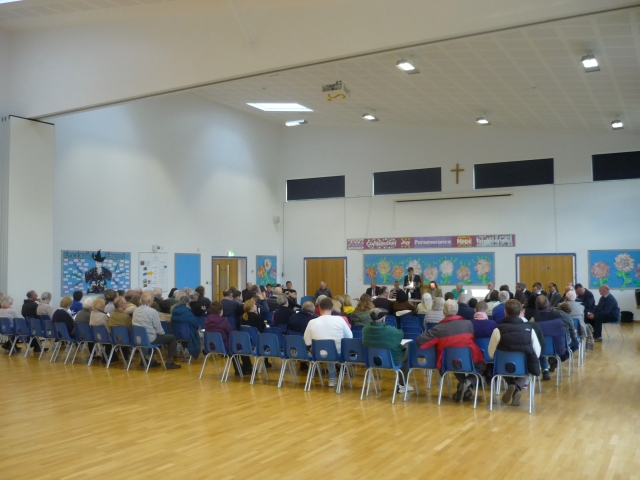 Around 70 members of the public attended this year’s event at Southborough Primary School. Other residents expressed concerns about:

Links to the audio from the meeting will be posted on this site over the weekend.