A strong turnout of around 50 local residents came out on Saturday for a hour long guided tour of the “Secrets of Southborough Common” led by Ian Johnstone (pictured below) of the Kent High Weald Partnership.

The overcast weather didn’t deter residents, who were rewarded with insights into what the recent clearing of the common has revealed about the history of the land.

Ian Johnstone led residents to where a windmill once stood, the remains of a charcoal platform that may go back to medieval times, as well as a grove of Scots pine trees, known as “The Pineys”, which is thought to have been planted as a Victorian feature to soar above what was then mainly open heathland on the common.

The picture above shows the eager walkers setting off for the tour with most having been briefed with a display of information inside St Peter’s Church organised jointly by the Kent High Weald Partnership, Southborough Society and the archeology group, SHAAS.

A grant from the National Lottery is being spent in part on slowly clearing some of the holly and laurel that has overgrown what had been a much clearer outlook for Southborough Common in Victorian times (see below). 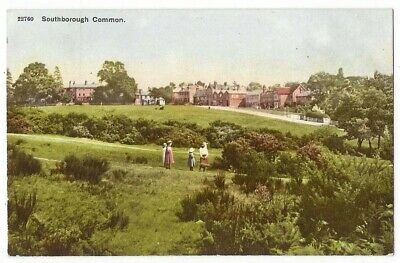 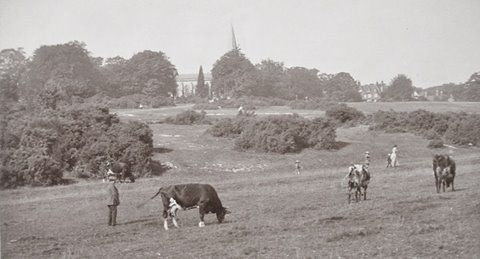 The Southborough Society also has funds to digitise its extensive archive – a programme that is now in its advanced stages.

Ian Johnstone explained that the section of Southborough Common to the north west – known as Whortleberry Wood – was once isolated from the rest of the Common.  The trees in this area appear to be mainly beech, with some mature beeches appearing to be around 200 years old.

It is likely the beech trees were grown for timber or coppicing, so big ditches were dug all round this section to keep animals out. These are still visible today (see below) and there are also remains of rusted Victorian iron railings to be found next to the ditches in some places.

Whortleberry Wood was enclosed from the neighbouring pasture to prevent grazing animals from browsing on coppiced woodland. The enclosure dates from the early Medieval period (AD 410-1066). Whortleberry is another name for bilberry (or huckleberry) – a berry rich with Vitamin C – which grows well on the sandy sloping soils in the wood.

Maps were provided and Ian Johnstone declared that this was the largest turnout so far for his tour after expensive publicity in advance from the organising groups.

Ian Johnstone took the tour to one site where it is possible the horse fair was once held which featured in a famous painting (below) from 1857 called “An English Horse Fair on Southborough Common” by John Frederick Herring Snr.

The Kent High Weald Partnership have been carrying out management work of the common with the help of volunteers since 2012. Their website is: http://southboroughcommon.co.uk

The Southborough Society report on the event is at:
https://southboroughsociety.org.uk