A new bus timetable comes into effect on April 2nd but there’s disappointment that there will be no improvement in the sparse service at peak times, suggesting that car drivers will continue to clog up the A26 and pollute Southborough’s air for the forseeable future.

There had been hopes that a more frequent peak time service would tempt more commuters heading for Tonbridge station to take the bus and also persuade parents using their cars on the daily school run between Tonbridge and Tunbridge Wells to send their children by bus instead.

However, a review by the Arriva bus company of the service from Tunbridge Wells to Tonbridge actually seems to have resulted in a less frequent peak service than before.

The bus service from 7.32am to 8.32am from Southborough still consists of just 2 buses to Tonbridge – just one every half hour. The total of morning services up to 9am is cut from 16 to 13. Arriva says its changes: “are designed to improve reliability but also include improved Sunday services”.

One passenger recently told Southborough News that the existing poor service around 8am was “outrageous” and frequently made her late for work and schoolchildren late for school.  She said: “Two buses drove straight past me because there was no more room on them – I waited 40 minutes to get the morning bus to Tonbridge.” 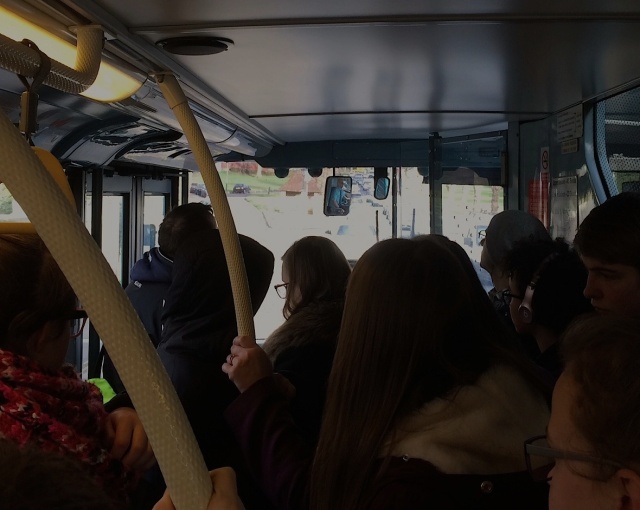 The packed inside of one of the peak time bus services is shown above approaching Southborough Fountain stop around 7.45am, with little room for more passengers.

During term time, two school buses also currently take on regular passengers at Southborough just before 7.30am, but one of those services has been cancelled. The 581 bus to Hugh Christie – which did start in High Brooms – will cease.

Key: Time in bold is route 7 to Maidstone; others are 402 to Dunton Green (italics to Bromley)
h – Hugh Christie bus only runs during school days

The sparse service at school and commuting rush hour contrasts with a far better service during the daytime. Southborough News has requested an explanation from Arriva.

On Mondays to Saturdays, the daytime service after 9am will continue to run on average every 8 minutes from Southborough to Tonbridge. Every hour, 3 buses will be heading to Sevenoaks and 3 to Maidstone with 1 to Bromley.

On Sundays, there will be an increase to 2 buses an hour between Tonbridge and Tunbridge Wells town centres via Southborough. Currently there is just one bus every hour on Sunday. Also on Sundays, the 281 between High Brooms, Tunbridge Wells and Rusthall will be increased to run every 20 minutes.