A veteran performer on the stage of the Royal Victoria Hall has made a new appeal for it to be saved – rather than demolished – and has listed six “special attributes” the theatre possesses.

Derek Holland told Southborough News “The acoustics of the Royal Victoria Hall are better than any theatre I have played in.  Without any microphones, you could stand on the stage and whisper and be heard in the gallery.”

Mr Holland said: “I could name half a dozen people who would happily run the Royal Victoria Hall, as a non-paid job.”  He said the replacement space proposed within the Hub was not a theatre, but a plain hall without any of the same facilities.

In a comment published on the planning website on Friday, Mr Holland (pictured above) said he had been associated with the Royal Victoria Hall since 1973 and since then had been involved in plays and Old Time Music Hall productions and so says he feels  “somewhat qualified to speak of the special attributes that this superb theatre has.”

He points to these six features:

PLEASE DON’T PULL IT DOWN – YOU WILL LIVE TO REGRET THIS SHORT SIGHTED DECISION IF YOU DO.

Mr Holland is pictured below wearing a purple robe and gold crown on the right of the cast photo of “Funny Thing Happened on The Way to the Forum” on stage at The Royal Victoria Hall in March 2014. 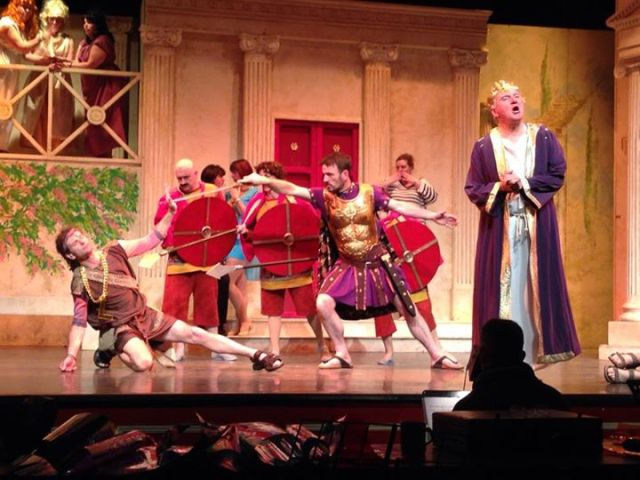 Before retiring, Derek Holland was a businessman and served as the managing director of a printing company, The Color Company, from 1999 to 2003.  He joined the Tunbridge Wells Drama club in 1972 which went on to become the Trinity Theatre Club.

Mr Holland was a in a professional production of “Peter Pan” at the Assembly Hall playing “Smee” opposite Captain Hook  played by Colin Baker of “Dr Who” fame.  Now aged 72, he is just about to play “Buffalo Bill” in “Annie Get Your Gun” in Rotherfield starting on October 13th.

Mr Holland continued that after seeing one local amateur production recently in Wadhurst, he was  “gobsmacked” by the high quality of the young acting talent in the Tunbridge Wells area and a revived Royal Victoria Hall could make money if run properly.